I had no idea how expensive my affair would be

Nineteenth century Danish philosopher Søren Kierkegaard, is famous for his use of metaphor, irony, and parable in explaining ethical and religious concepts. One particularly famous parable describes a rather odd crime:

Two thieves broke into a jewelry store one night, but instead of stealing the jewels they simply switched the price tags. They put high-priced tags on cheap jewelry and low-priced tags on valuable gems. For several weeks no one noticed. People bought cheap jewelry for exorbitant prices and rare jewels for next to nothing.

Kierkegaard’s point is that we sometimes have difficulty assessing the actual value or cost associated with something. If we are told it is valuable, we believe it. If we are told something is cheap, we accept it as fact. Our concept of “price”, “worth”, and “value” are subject to the costs and benefits that we assign. But what happens if you assign these incorrectly? Worse yet, what happens if you accept a lie about what something is worth? We live in a fallen world where someone has switched all the price tags around. We assign unmerited value to things that are worthless, and overlook priceless items as inconsequential. We take the most valueable things for granted (integrity, honesty, commitment) while minimizing the full consequences of selfish actions.

Sin is expensive. Incredibly expensive. But the price isn’t paid in cash, it’s paid in mental, emotional, and spiritual pain. God didn’t create an arbitrary list of “DOs” and DON’Ts” to see if we could follow them. No, He laid out a set of essential guidelines for living. His anger towards lying, stealing, cheating, coveting, murder, jealousy, and pride is because all of these behaviors destroy relationships. Everything that the Bible labels as sin is something that God is trying to protect us from. His desire is love, peace, grace, and harmony with Him and with all of creation. Sin is our defiant rejection of this in an effort to satisfy our own selfish desires. Almost two years ago, I set out on a destructive path of selfishness that culminated in a two-month affair which nearly destroyed my family. I had no idea just how expensive that path would be. Sadly, we are still paying the price for my selfishness.

Every decision has a cost 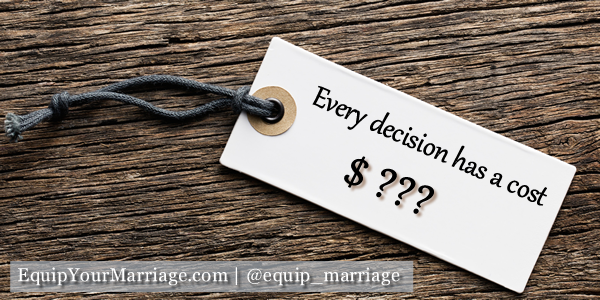 My economics professor told me years ago: “there is no free lunch.” If someone offers you something for free, you need to dig deeper. Every decision has a cost. Nothing is ever truly free. Even something that appears to be inconsequential initially, may have substantial long-term effects. The decision to eat unhealthy food has both an initial cost and a long-term cost. The same holds for decisions within relationships.
At its core, all sin is selfishness. In some cases, that selfishness leads us to rationalize actions as being relatively inexpensive (“this will only really affect me, not anyone else”, “I can play near this fire and not get burned”). In all cases, the full emotional and mental cost of our selfish choices is not paid until months and years later. I truly believed that my affair in 2012 was a victimless crime. I naively thought it only impacted the two of us. I was dead wrong. In reality, it hurt every person in my family (myself included) and devastated my wife to such a degree that she is still paying the price nearly two years later.

The full cost of my affair

It is difficult to fully appreciate all the ways that my sin has impacted my life and the life of my family. There were initial costs, short-term costs, and long-term costs.
Initial Costs
Short-term Costs
Finally, that fateful day at Starbucks arrived. Tammy and I sat down to divide assets and get everything ironed out for the divorce. She confronted me, the Holy Spirit worked on my heart, and we turned a crucial corner. We decided to fight for our marriage and for our family. But the full cost of my selfishness had not been paid yet.
Long-term Costs

What have you sold too cheaply?

My selfishness was incredibly expensive. But I only see that now in hindsight. What seemed at first to be a personal decision that impacted no one else, turned out to be slippery slope of pain and anguish that devastated my entire family. I sold my integrity, self-esteem, peace of mind, family unity, and marriage at rock-bottom, discount prices. These things were incredibly precious, and I sold them for pennies on the emotional dollar.
As I have shared my story with other men, I have heard from so many that they see ways in which they have allowed their own selfishness to chip away at the joy in their marriage. We have all sold something precious in exchange for meeting a selfish desire:
Maybe its time to start putting the correct price tags on your own actions within your marriage. Recognize the ways in which you have played fast and loose with your mate’s heart. It’s time to stop the cycle of selfishness and honor your marriage as the precious gift that it is.
So the question is, what have you sold too cheaply?

Our Marriage Testimony on Bring It Radio – July 2014

Kyle and Tammy’s Marriage Testimony: We sat down and talked with Michelle Bentham and Mindy Dawn, hosts of Bring IT Radio. They asked us questions about our marriage testimony, family, and our ministry. We shared our story – how we got together, how we fell apart, and how God’s love and grace redeemed our mess of a marriage.

We hope that your marriage is blessed by our story and the truth of God’s redeeming and healing love. Your marriage testimony could be next.

Edited and shared with permission of Bring IT Radio.

God can save ANY marriage

from the Thrive Class we took at Northwood Church in 2013:

On December 16th, 2012, we sat down at a Starbucks in Keller, TX to divide assets and discuss how to accomplish an amicable divorce. What started out as a 45-minute business meeting, concluded after 3 hours of crying, praying, and hugging. The next day I got down on one knee, gave her a single rose, and asked her if I could have the honor of winning her back over the course of 2013 and perhaps the rest of our lives. The relationship we have now is rich and full of life, but we didn’t get there overnight. The transformation of our marriage required a lot of crying, praying, talking, reading, praying, laughing, journaling, studying, praying, counseling, and even more praying. God is in the business of fresh starts, second chances, and renewals.

Tammy and I had a broken and battered relationship that had crashed and burned to the ground. But like the mythological phoenix, our new marriage emerged from the ashes. God makes beauty out of ashes. He makes marriages out of messes. And He wants to work a miracle in yours.

Eager to know more about this awesome couple? You can read our full story for more details.

From romance, to heartache, to renewal. Our story is a testament to the power of unconditional love. God createsbeauty out of ashes.